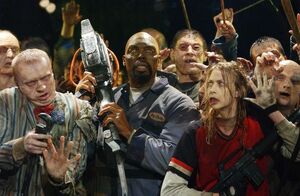 Zombies are deceased people who have resurrected by a mysterious phenomenon, and they are the main antagonists of George A. Romero's Living Dead series.

A human corpse becomes a zombie due to an unknown phenomenon that causes reactivation of the brain upon death. Instead of being spread from person to person, the phenomenon presents itself in any human that has recently died from any cause (except those that destroy the physical structure of the brain). Once a person dies, it will only take a matter of minutes for the corpse to reanimate. The cause for the phenomenon is unknown, but characters speculate that it is caused by a space-borne virus, divine punishment, radiation from a satellite returning from Venus, or that there is simply "no more room in Hell."

While bites from zombies are uniformly lethal, by mechanics unknown, death by other means would have the same result, so a bite is not necessary. It is suggested in Day of the Dead that the immediate amputation of bitten limbs may prevent victims from dying, but while the treatment is attempted, its success is never conclusively demonstrated. In George Romero's original Day of the Dead idea, a person was to have his bitten arm amputated, but still return as a zombie. Survival of the Dead shows that, in the rare instance of a living person biting the undead, that person will become infected.

Zombies do not appear to decompose like regular corpses, as in Land of the Dead, the bodies of several zombies who had presumably been undead for years were still preserved relatively well. In Day of the Dead, Dr. Logan stated that reanimation of a corpse slows the decomposition process considerably and that a zombie could last for up to twelve years before mobility would begin to be significantly affected.

Exceptionally intelligent zombies like Bub and Big Daddy also retain enough memories of when they were alive to operate crude devices and feel emotions such as empathy and rage, and even cease to attack humans for food, although Bub still consumed the butchered remains of Pvt. Johnson and Pvt. Miller (offered to him by Dr. Logan as a reward for his good behavior). As noted by Dr. Millard Rausch and others, a number of other zombies also retained enough intelligence to use rocks and other objects to smash windows and lights, as well as to kill their victims prior to consuming them; The newly reanimated Karen Cooper, for example, stabbed her Mother to death with a trowel immediately before she began to devour her, while the majority of zombies eat their victims alive.

Zombies initially lack full cognitive function and act only on a single drive: the need to seek and consume living flesh. Night of the Living Dead and Survival of the Dead depicted zombies eating animals as well as humans, however, in the latter film, zombies appear to prefer humans. According to George A. Romero, this is because zombies are simply compelled to attack and attempt to eat any "warm bodies" they come across. It should be noted that the zombies have no true physiological need for flesh, nor can their expired digestive organs derive sustenance from it at all.

The animated dead retain vague impulses derived from former living behavior. For instance, zombies often return to specific locations they frequented when alive (examples from the original Dawn of the Dead, hordes of zombies are compelled to congregate in a shopping mall, and a undead Stephen knows where to find the secret hideout containing his still-living former companions). Lacking immediate victims to hunt, zombies will often fumble through crude motions reminiscent of life activities, often when prompted by a familiar artifact such as a telephone or car.

With stimulus, it is possible for some specimens to begin to remember more of the common activities they performed while alive and achieve a basic functioning intelligence. In Day of the Dead, the zombie nicknamed Bub was "educated" into docility by Dr. Logan, learned (or remembered) how to operate a handgun and even developed a childlike affection for its instructor. In Land of the Dead, the zombie known as Big Daddy developed sophisticated cognitive function on his own, felt affection and empathy for his fellow zombies, could teach other zombies how to use objects (including weapons) and devised crude strategies for bypassing the defenses of the living humans who had destroyed many of his fellows. The more intelligent zombies like Bub and Big Daddy retain their hunger for living human flesh, but can put off immediate gratification if doing so offers a chance for more significant reward later.

Zombies are shambling and slow-moving creatures. George A. Romero has stated in interviews that this is due to rigor mortis, and a sheriff in Night of the Living Dead said it is because "they're dead, they're all messed up."

Initially, zombies were also weak and unintelligent creatures, compelled to mindlessly attack and attempt to devour any warm flesh they come across. Also, as the phenomenon that causes the dead to rise does so by reactivating the brain after death, a zombie can be killed by destroying or fatally damaging its brain. Decapitation only immobilizes the body; the head would remain to snap or bite anything it could come across as food.

Zombies can also be killed via burning. They are shown to be afraid of fire, but this fear was somehow gone in The Land of the Dead.

Retrieved from "https://livingdead.fandom.com/wiki/Zombies?oldid=6177"
Community content is available under CC-BY-SA unless otherwise noted.