Barabra Cole is the main protagonist in George Romero's 1968 film Night of the Living Dead (as well as the 1990 remake) along with Ben. She was portrayed by Judith O'Dea in 1968 version and Patricia Tallman in the 1990 version.

In 1968, Barbara and her brother, Johnny, drove to a cemetery in Pittsburgh to visit their deceased father's grave. During the visit, Johnny often teased Barbara about their childhood, in which Barbara was often subject to cruel scare-jokes. Johnny then kept chanting "They're coming to get you, Barbara.", and when a strange man was seen walking through the cemetery, he made cruel jokes about how that man was going to come after her, not realizing how right he was. Annoyed, Barbara was about to walk up to the stranger and apologize for her brother's juvenile behavior, until the stranger attacked her. Johnny rushed to her aid and fought the stranger until he was thrown down on the ground and suffered a fatal blow to the head when the stranger threw him down on a gravestone. Frightened and unable to help her brother, Barbara ran off to the car, being stalked by the stranger. The stranger took a rock and smashed the window open to try and get to Barbara, who desperately released the emergency break and let the car roll off until it crashed into a tree.

Finding a nearby farmhouse as her only refuge, Barbara rushed in, pleading for help. While searching the house, she found a corpse on the second floor, it's head having been skinned down to the bone. Horrified, Barbara was about to rush out of the house until she saw a truck pull up. A man named Ben rushed in to protect her, killing the other hostile strangers who were approaching and/or inside the house. While Ben worked to barricade the doors and windows, Barbara went into a catatonic state.

During that state, she heard what was going on through the radio and learned that the person who attacked her was a zombie and only one in thousands. She and Ben explained their stories and how they got here, and tried to convince Ben to take her back to the cemetery and find her brother, but Ben, knowing her brother was dead, refused. Going into a blinding rage, Barbara attacked Ben, who in turn, had to strike her and incapacitate her to keep her calm.

After coming to, and returning to a calm state, Ben went upstairs to search for any other supplies. While waiting for Ben to return, Barbara noticed the door of the cellar open and screamed in fear, alerting Ben, who rushed down and stood to protect Barbara, until he found they were more survivors; Harry Cooper, his wife Helen, their daughter Karen, Tom, and his girlfriend Judy Rose. When the arguing between Ben and Harry started, more and more of the zombies heard them and started approaching the house. A television was set up where the news broadcast revealed that the bodies of the dead were being reactivated by an unknown force and began feeding on the living.

After Ben's plan to refuel his truck with the pump outside resulted in the truck exploding and the deaths of Tom and Judy Rose, Barbara suggested that they leave, knowing the house was not safe to stay in. When zombies started breaking into the house from every window and door, Barbara tried to help Ben keep the front door barricaded, until she saw her brother, now a zombie, breaking the door down. Frozen in fear, she let Johnny drag her away into the crowd of zombies where she was presumably devoured off-screen. Barbara's fate is revealed in a series of installments.

In this unofficial spin-off comic series published by Avatar, Barbara's Zombie Chronicles, Barbara survived the farmhouse and went from becoming a damsel in distress, to a brave, tough as nails, kickass fighter. This is non-canon.

Night of the Living Dead Edit

In this official Night of the Living Dead comics series also published by Avatar, the series was written by the 1968 films producer John Russo and presented by the 1968 films director George Romero. Barbara turned into a zombie and later joined Johnny, Karen (also a zombie) and the rest of the undead group killing other survivors in the Pennsylvania, Pittsburgh area then wandered off to Washington D.C to kill more survivors. This is canon.

Ultimate Night of the Living DeadEdit

In another unofficial seperate comic series published by Double Takes, Ultimate Night of the Living Dead, Johnny (who was unconcious back in the cemetary) found Barbara in the farmhouse and rescued her by posing as a zombie and they escaped from the undead crowd. This story is set in 1966 as opposed to 1968, it is also non-canon.

Night of the Living Dead: GenesisEdit

Barbara is revealed to be alive in Night of the Living Dead: Genesis. An upcomimg unofficial sequel to the 1968 film. Judith O'Dea will reprise her role as Barbara, but it is unknown as of yet how Barbara survived. George Romero did not direct the sequel nor is it produced by John Russo.

Night of the Living Dead (1990 film)Edit

Barbara's role in the 1990 remake more or less same, but she is somewhat more resembles her incarnation in Zombie Chronicles. Here, though was traumatized with what has happened, she eventually overcome her fear and became the braver person. Barbara remains solid-minded while everyone else slowly goes mad even with zombies managed to overran the house, and she even survived the ordeal by the end of the film.

At the beginning of the undead apocalypse, Johnny and Barbara visit their mother's grave in the Pennsylvanian cemetery. When Johnny realizes that Barbara is still afraid of the cemetery, he childishly taunts her and exclaims that an approaching man is a zombie. When Barbara walks up to the man to apologize, the man was shakened, muttering "I'm sorry" several times and walked away, much to Johnny's confusion. Suddenly, out from nowhere, a zombie attacks her. When Johnny tries to defend Barbara, the man kills the former and chases Barbara.

Barbara tries to escape in the car (which is on gear), but accidentally crashes it because a second zombie shoes up and tries to devour her along the first one where the one whom killed her brother break through the windshield and during the struggle, deactivates the brake and caused the car crashed on the nearby tree. She escapes to a nearby farmhouse and locks the pursuing zombie out. When she discovers a partially devoured corpse at the top of the stairs, she tries to flee the house just as a zombie entered the unlocked back door another one, whom turned out inside the house shows up.

However outside, Ben, whom coming with his car, rammed the zombie whom killed her brother and exit the car. Ben tries to snap her out from her hysterical state and dragged her back into the house. As Ben killed one of the zombies inside, Barbara, channeled her stress and fear over the recent events which have transpired, attacked the other one with a hooked iron pole, but only succeeded in killing him once she delivers a criplling blow on his brain.

As Ben returns to the house to find things beginning to dissolve into chaos, Harry, whom already gone mad with the situation has wrestled Barbara's gun away from her and is now armed. Unknown to the survivors upstairs, Sarah, whom now became zombie after killed her mother, makes her way upstairs and triggers a shootout between her father, who is trying to protect her, and Ben and Barbara, who are trying to protect themselves. Both Ben and Harry are badly wounded where Barbara managed to shoots Sarah as Harry retreats upstairs to the attic.

Barbara leaves the house alone and attempts to find help after eluding zombies that she encountered. She eventually joins a group of Countryside locals who are clearing the area of the undead. She's awoken the next day and is surrounded by safety of the media and townspeople. Noticing hillbillies playing around with a couple of zombies, she comments on the similarities between the living and the undead. She returns to the farmhouse to find Ben, who died of his wounds and has been reanimated. He gazes at Barbara before being shot in the head by one of the posse members. When Harry emerges from the attic alive, Barbara kills him in a fit of rage for causing Ben to die, and turns to leave the house, telling the vigilantes they have "another one for the fire". The film ends as Barbara hypnotically watches the bodies being burned in the fire.

During the zombie outbreak, Barbara became catatonic and helpless. She also had a fear of cemeteries, and constantly bickered with her brother, Johnny.

Her personality in remake remained same, but her catatonic and helpess state was least worse compared with her counterpart in original film, as Ben managed to comfort her after killed the attacking zombies. Barbara remains solid-minded while everyone else slowly goes mad even with zombies managed to overran the house. She also quite observant, as she stated that everyone can easily outran the zombies due to them being slow by running.

Although, her ordeal also embittered her so much that her faith on humanity cripples, as seen when she watch hillbillies paying with zombies, she stated that the dead and the living are nowhere to be same. She even killed Harry in retribution over his murder on Ben.

Barbara and Ben in Night of the Living Dead 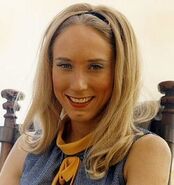 Judith O'Dea behind the scenes of Night of the Living Dead

Barbara and her brother Johnny

Add a photo to this gallery

Retrieved from "https://livingdead.fandom.com/wiki/Barbara?oldid=6139"
Community content is available under CC-BY-SA unless otherwise noted.